Ten years ago, we embarked upon a passionate adventure; Barcelona Architecture Walks! Today we want to tell you how it all started.

This is a story about a a couple of architects from Barcelona, Elodie Grammont and Miguel Angel Borras, who decided to take a trip to Australia looking for new horizons for inspiration on the other side of the planet. In Sydney they met Eoghan Lewis, an architect that gave architecture tours. It was from Lewis they learned that one can explain a city from a different point of view. Such was the passion and enthusiasm with which Lewis explained the architecture, history and culture of his city that Elodie and Miguel Angel realized that Barcelona could benefit from the same approach. Because they have always been involved in the dissemination of architectural knowledge, they felt fully capable of setting up something similar in Barcelona.

So when they got down to work upon their return and after months of research and content creation they designed a route focused on the Santa Caterina Market, the most recent work of architect Enric Miralles, someone for whom they felt a great admiration.

The beginning was difficult and after a period of time they realized they needed to increase the number of routes they offered to reach a larger public and show off the incredible architecture of Barcelona, which had always been their main objective. Barcelona Architecture Walks wanted to invite those visitors that wanted to learn something and discover the magic of Barcelona; that is how they fell under the charm of the city’s most idolized architect, Antoni Gaudi.

They were looking for a genuine expedition through the magial universe of “Modernismo”: offering a point of view that set itself apart from the more commercial tours. Later on another tour was added, one which explains the ins and outs of the “Eixample” or gridded area of Barcelona and how it fits into the city’s urban plan; another tour focuses on the [email protected] area, an emerging technological neighborhood and the last tour explains the history of the city from its pre-Roman origins to the new skyline. It is through these different tours that Barcelona Architecture Walks gives visitors a comprehensive view of the city from its early history to its present state, a unique urban plan and fascinating architecture.

To do this Elodie and Miguel Angel have surrounded themselves with a great team of architects including Guille Genestar, Rafael Gómez, Silvia Martinez, Ricard Pons, Carmen Popescu, Jaume Prat, Jelena Prokopljevic, Daniela Sanchez, Cristina Santamaría, Pia Wortham; all of whom have a broad professional trajectory involving teaching, and dissemination of architecture. They are guides that transmit the passion and effort that has gone into the design of each of our tours while giving each tour experience a personal touch.

So, by mixing equal parts of hard work, our concerns and confidence in what we have to offer, the recognition started to appear. We have been included in articles from international publications as well as in the lists of the best architectural tours; something that we could never have imagined. We have also been rewarded with participation in international events organized by companies and universities interested in discovering the city with BAW, plus hundreds of positive reviews from our clients which in many cases help us to improve and build confidence in our product.

Today we offer five regular tours: Gaudi, Urbanism, Gothic to Modern, Barcelona and the Sea, the Future. We also have five special tours: Sagrada Famila, Landscape, RCR, Modernisme XL, Barcelona 1929-1992 which are given upon special request.

As you can probably imagine, 2020 has been difficult for the entire tourism industry, but it has also given us the opportunity to review and update, once again, what we do. We will soon be launching a virtual BAW; coming soon. The virtual BAW will display and explain Barcelona and her architecture to all of those who want to wander her streets from their own homes in these difficult times… The virtual BAW will open a window through which we will transmit our passion and knowledge.

We will like to end by thanking all of you who have chosen to visit Barcelona to discover our city by walking with the BAW, as well as our collaborators that were part of this project from the beginning; Joan Vitoria and Jordi Garet from Globus Vermell, Carola Vega, Martina Corona y Pia Callis. Thanks to our present team of architects and virtual communicators Mavi Hita and Jaume Subirats, thanks to Joana Casals for the graphic design and to our friends and family because without their support and vote of confidence none of this would have been possible.

Do you want to help us write the next chapter of the story? 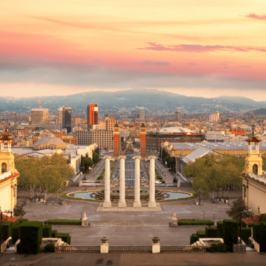